The 2015 passage of the Every Student Succeeds Act (ESSA) ushered in a new era for state accountability systems. With less prescriptive federal requirements, ESSA provided states an opportunity to rethink both how they identify schools that need to improve and how those schools might be improved. The law requires states to submit their plans to the U.S. Department of Education and then begin implementing their approved plans in the 2017-18 school year. Sixteen states plus the District of Columbia submitted their plans in the spring of 2017, and the remaining 34 states submitted their plans in September.

These plans are an opportunity for states to explain what actions they plan to take in exchange for billions of dollars in federal funds, and to showcase how they are tapping the new opportunities in ESSA to design accountability systems that will improve educational outcomes for all students. States explicitly asked for this opportunity, and the ESSA plans were their first chance to show what they plan to do with their newfound flexibility. But, while the potential exists for state innovation, looser federal rules also carry the risk that states may not meet the needs of historically underserved students and the communities these funds are intended to help the most.

To determine whether states were living up to this commitment and balancing innovation in tandem with equity, Bellwether Education Partners, in partnership with the Collaborative for Student Success, convened two rounds of objective, independent peer reviews of the state plans. The results of our analysis of the first 17 plans are available on the Bellwether website, and we compiled best practices by category at CheckStatePlans.org. This report compiles our findings after reading the remaining 34 state plans.

The founding principle of ESSA was that states, unbound by federal oversight, would develop stronger, more creative education systems that in the end would better serve students and increase equity. The law was intended to act as a floor upon which states would build compelling and innovative systems. As such, compliance with the federal law is necessary, meeting the law’s minimum requirements will not be enough to improve education for all students. With that in mind, our reviewers were looking for states to go beyond simply checking the boxes. We explicitly recruited a diverse set of peers, and we asked them to be open to a range of different approaches. We were interested in identifying best practices, not judging states against our own preferences, and we created a simple rubric to evaluate state plans based on nine key elements of what we considered to be foundational aspects of high-quality accountability systems.

Unfortunately, we found that states were not taking full advantage of the opportunities ESSA presented. Instead, with the few exceptions noted below, we found state ESSA plans to be mostly uncreative, unambitious, unclear, or unfinished. This was especially disappointing for states that submitted their plans this fall, whose leaders did not take advantage of the additional time and resources that were made available to them as the result of a later submission date. It’s possible that states may go back and bolster their plans over time, but it does not inspire confidence that states chose not to submit plans that advanced educational opportunities in bold and innovative ways for all students.

After the states submitted their official plans to the Department of Education, we convened a bipartisan, nationally esteemed group of more than 45 education policy experts, with diverse ideological perspectives, and with a strong emphasis on individuals with state-level experience, to review each plan individually and in small teams. The full group also included specific content experts to address the unique challenges associated with students with disabilities and English learners.

Reviewers used their own judgment and expertise to respond to and score each of nine rubric items, and those scores have been normed across states and peers. Before the results of this process were released publicly, we offered state education agencies the opportunity to respond to our reviews, correct any inaccuracies, and/or point us to additional information beyond their formal ESSA plan, and that feedback is reflected in our final reviews. As the plans are living documents, we recognize that there is still the possibility of inaccuracies and any remaining errors are our own. The findings in this executive summary reflect what we heard from the peers and states collectively.

These reviews represent a snapshot in time. That is, they reflect the quality of state plans as submitted to the federal government. As of this writing, the federal process is ongoing, and states are likely to make changes to their plans up until they earn approval. Even beyond those approvals, we hope our reviews can help the states continue to improve their plans as they turn toward implementation.

Although questions remain about some of the individual choices states made, and some states were already moving in these directions, states continued to make noteworthy progress in broadening the scope of what it means to be a successful school. More specifically, several individual state plan components from the September submission window are worthy of praise and should be considered models or exemplars for other states to follow:

Unfortunately, across the reviews, potential issues and areas of concern persist. Those notable issues include:

These trends and general lack of detail are worrying. Although ESSA provides some “guardrails” that every state must follow, it leaves significant discretion to individual states. We encourage the U.S. Department of Education and federal peer reviewers—like our own—press states to fill in these gaps prior to approving the plans. As we transition to a world where every state has the opportunity to design its own unique system, states have a responsibility to parents, educators, and the broader public to clearly articulate how those systems will work.

Where We Go From Here

ESSA provides states with a number of flexibilities in how they create accountability systems that are tailored to local needs and that support an excellent, equitable education for all students, but most state plans did not take advantage of these opportunities. An optimist might view that as states taking their time and not wanting to codify plans that they want to change and improve later, based on early implementation results. A pragmatist might also note that states were responding to the questions asked of them to get their plans approved, and states were smart to avoid adding unnecessary details that didn’t affect their chances of approval. After all, the plans are both political documents for the states and a compliance exercise for the federal government. Indeed, we heard many of these arguments from states when we shared preliminary drafts of our reviews.

But a pessimist or a skeptic might point out that states have now had two years to complete their plans, and any remaining holes could also reflect a state’s lack of willingness or lack of capacity to commit to taking strong actions to intervene in places where students continue to struggle.

A skeptic might also wonder how states are going to implement some of the promises they’ve put on paper, particularly if those promises turn out to be more expansive than many anticipated. What if a state’s promised rules lead it to start identifying 40 or 50 or 60 percent of their schools as in need of improvement for students with disabilities or black, Hispanic, or low-income students? Will states follow through on their promises, or will they turn to clever statistical rules, such as confidence intervals or averaging procedures, to hide those results? It’s too soon to know if that’s a valid concern, but states have done nothing to alleviate it in the two years since ESSA passed, and it would not be the first-time states put forward processes to artificially inflate school scores, hide the performance of subgroups, or minimize the consequences faced by chronically low-performing schools.

All states have room to learn from their peers and continue to improve their plans. In the short term, the U.S. Department of Education has a responsibility to ensure there is sufficient information in the plans to meet the fundamental requirements of the law and ask for more detail, where necessary.

Even after the plans are approved, the federal government and states alike should carefully monitor implementation efforts to determine where plans have been successful and where changes are needed, and help build further evidence for the approaches and activities that promote equity and lead to better results for kids. We encourage advocates, state departments of education, and governors to use the lessons learned from this peer review process to guide stakeholder engagement conversations and plan implementation going forward. The findings from our independent reviews should be viewed   as additional guidance from a bipartisan panel of experts and, within the context of each state, can provide important information on how to put in place strong statewide accountability systems that serve all students. 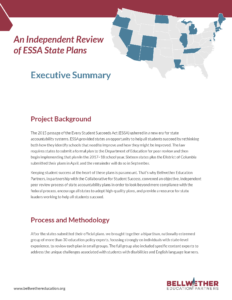 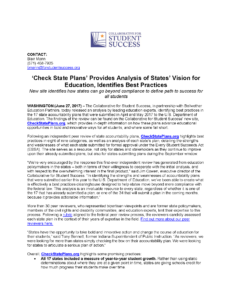 Click here to read the report on the first round of 17 states.